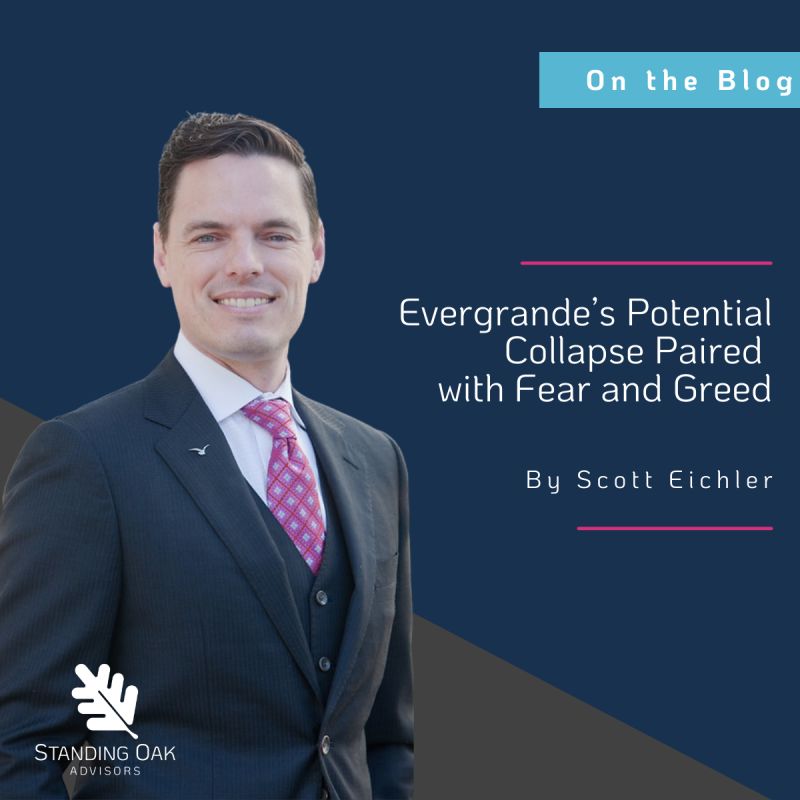 “Scott, is Evergrande’s collapse the end of life as we know it?”

I’ve received some form of this question a lot between this year and last year. A research group named DALBAR, made a press release that was subtitled, “the Average Equity Fund Investor lost twice the money of the S&P in 2018.”

The answer, through DALBARs research, was simple. People react to the market with fear and greed. When I say “people,” I mean, “just about everyone.”

Investing is based on only two things, math and psychology. Remember how much all those math majors in college looked up to the psych majors? Remember how much the psych majors mused about what math majors could do for work other than teach? Investing is a pure culmination of those two areas of study. You have to convince people to augment behaviors to follow mathematical proofs. I doubt you could get closer to a humanized example of oil and water.

Take, for instance, Evergrande’s potential collapse. The collapse isn’t even certain. This “potential collapse” is related to a Chinese real estate developer. A couple families I worked with called to ask how much Evergrande we owned in our portfolio. The answer, “None.” Maybe some international bond issues were related to Evergrande, but the worst case scenario was about 0.1%. While Evergrande is a multi-billion dollar, international corporation, the reality is that it’s a small fish in the investment ocean. How does it push the US equity markets to lose 2%+?

People’s emotions are the waves that move the investment ocean. That small fish isn’t looking too good. This leads many people to worry that all the fish are sick. When Lehman Brothers collapsed it was the United States fourth largest investment bank (Belyh, 2019). Their collapse was directly attributable to a collapse of the US housing market. The Lehman whale (to continue our analogy) was suffocated by its environment. Evergrande, on the other hand, appears to have its demise rooted in something far less insidious. Evergrande will likely be more akin to the US oil selloff of 2016. Chinese authorities are cracking down on overleveraged property developers (Richter, 2021). Evergrande has more debt than any property developer in the world (Richter, 2021). During the US oil price crash of 2016, over levered energy companies were smashed (Haynes Boone, 2020), but, in the end, this didn’t crush the economy. Longer term, the oil crisis represented a blip on the radar. Evergrande may be bailed out by the Chinese government; they may be allowed to fail. However, in the end, the effect will likely be similar to the US oil business. Strongly capitalized companies will come in and buy assets for cheap. There will be pain in Chinese real estate. That said, are we looking at a cataclysmic, world wide, financial meltdown? Likely not. China is likely trying to head off that exact situation.

Belyh: The Collapse of Lehman Brothers: A Case Study | Cleverism

Richter: What a Collapse of China’s Evergrande Would Mean | Wolf Street

A Practice of Gratitude – A Message from Scott Eichler

The idea of living richly has many different expressions. Gratitude is certainly one of my favorite...
Read More

How Much Do Paraplanners Make?

Money talks, doesn’t it? We are in the money business after all!
Read More

Why Should I Consider Becoming a Paraplanner?

Of course, I’m very biased when I say it’s a rewarding role. It’s not only financially rewarding,...
Read More